50 Years of Student Speech and the 1st Amendment: A Review 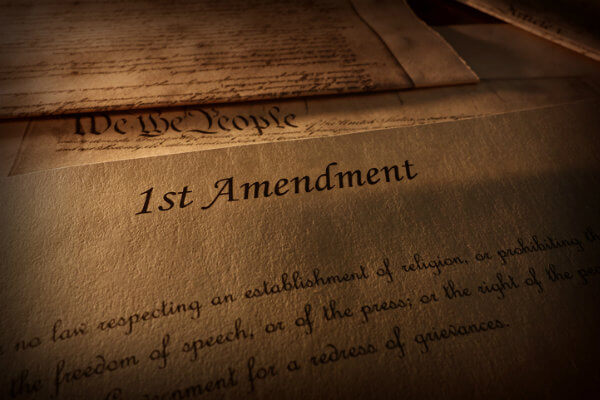 “First Amendment rights, applied in light of the special characteristics of the school environment, are available to teachers and students. It can hardly be argued that either students or teachers shed their constitutional rights to freedom of speech or expression at the schoolhouse gate.” Id. at 506.

In Tinker, high school students wore black armbands to school to protest the Vietnam War. They were sent home and suspended until they agreed to come back without wearing them. The Court ruled that school officials could not punish the students for expressing their views, because there were not “any facts which might reasonably have led school authorities to forecast substantial disruption of or material interference with school activities, and no disturbances or disorders on the school premises in fact occurred,” and the speech did not “impinge upon the rights of other students.” Id., 509, 513–14.

Over the years, lower courts have applied Tinker to more modern circumstances, such as online speech, threats by students against other students or school officials, and the display of Confederate flags at school.

Over the last 50 years, the Supreme Court has also created a number of exceptions to Tinker based on the special circumstances of the school environment. These exceptions permit school officials to restrict certain types of speech even when Tinker’s requirements are not met.

The exceptions started with Bethel School District v. Fraser, 478 U.S. 675, 682 (1986), where school officials disciplined a public high school student who gave a lewd speech full of sexual innuendos at a school assembly. The Court noted that while students have free speech rights at school, those rights are not "automatically coextensive with the rights of adults in other settings," and that certain speech which would be protected in other settings might not be protected in the public school setting. Id. at 682.

The Bethel Court used the Cohen v. California, 403 U.S. 15, 25 (1971), case as an example. In that case, the Court ruled that convicting a person for disturbing the peace for wearing a jacket with "F--k the Draft" (with the "F-word" spelled out) on the back during the Vietnam War violated the First Amendment, because government officials cannot punish speech just because they find it offensive.

By contrast, in Fraser, the Court noted that if a student had worn that same jacket from Cohen to school, school officials could discipline the student because schools have an obligation to teach students the "habits and manners of civility, and socially acceptable behavior." 478 U.S. at 682.

The Court in Bethel went on to uphold the student’s discipline for his lewd speech, noting that the obligation to teach students to be good citizens included the authority to "prohibit the use of vulgar and offensive terms in public discourse," and the speech at issue was "plainly offensive." Id. at 683, 685.

Two years later, the Court upheld a school principal’s decision to remove two articles that he felt were inappropriate from a school newspaper.

In 2007, the Court upheld a principal’s decision to confiscate a student-made “Bong Hits 4 Jesus" banner that students unveiled as the Olympic torch relay passed by the school. Morse v. Frederick, 551 U.S. 393 (2007). The principal believed that the banner promoted illegal drug use, so she ordered the students to take it down and disciplined a student who refused to cooperate. The Court said that the "rights of students must be applied in light of the special characteristics of the school environment," and school officials may "take steps to safeguard those entrusted to their care from speech that can reasonably be regarded as encouraging illegal drug use." Id. at 397. The Court ruled that the principal could have reasonably viewed the banner as promoting illegal drug use, so her actions did not violate the First Amendment. Id. at 408.

One of the challenges for determining if student speech is protected or not is figuring out which case/standard applies to a given situation. The answer can vary depending on the circumstances, the content of the speech, and where the speech occurred.

Student speech occurring online or on social media is one of the most prevalent areas of First Amendment challenges today. Most courts that have addressed the issue have applied Tinker, even if one of the exceptions would have applied if the speech occurred at school, and the results have been mixed. It will be interesting to see how the standards and cases evolve on this issue and others over the next 50 years.

Scott F. Johnson is a professor of law at Concord Law School at Purdue University Global, where he develops and teaches a number of courses including Constitutional Law and Education Law. He has written a number of books and articles in the education law area, including Education Law: A Problem-Based Approach, 3rd Edition, Carolina Academic Press (2015), and Special Education Law, 5th Edition, Sage Publications (2014). He recently developed a lesson on Student Speech & the First Amendment for the Center for Computer-Assisted Legal Instruction (CALI).

Is Equal Protection Really Equal in the Criminal Courtroom?
The Role of ‘Crimes of Moral Turpitude’ in U.S. Immigration Decisions