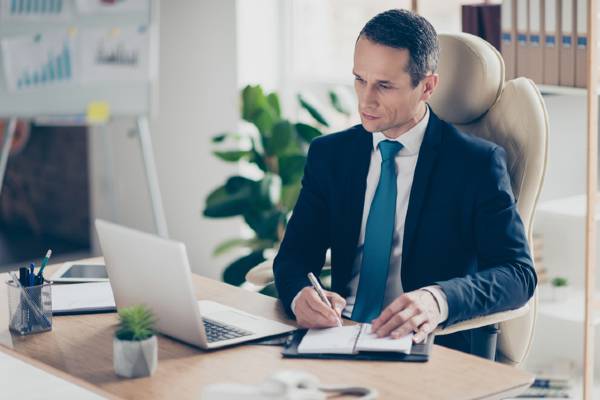 The office of the notary public can be traced back to ancient Rome. Now, this centuries-old concept is getting a high-tech update as more people work and do business remotely.

Remote online notarization (RON) is a process for completing notarial acts through the use of audio-visual communication and electronic signatures. To prevent fraud, it requires the verification of the signer’s identity through some form of authentication. A digital audit trail and recording of the audio-visual session serve as evidence of the notarial act.

According to the National Notary Association, 46 states have passed laws or temporary rules that allow notarial acts to be completed remotely. In many states, the governor issued an executive order or emergency proclamation allowing for RON due to the COVID-19 pandemic. Those temporary rules are set to expire in six states, while 34 have made RON permanent through legislation or regulation, and six have laws that are pending. California and New York do not permit RON, and Connecticut only allowed remote notarization of tangible documents for the duration of the public health emergency. South Carolina has taken no action.

The widespread adoption of RON laws has facilitated many everyday transactions, such as buying or selling a home or car or executing a will. However, state laws vary substantially in terms of who may conduct a remote notarial act, what types of documents may be notarized remotely, the requirements for authenticating the person signing, and recording the communication.

Although the states have historically controlled notarization, some groups argue that national standards are needed to facilitate interstate transactions. The Securing and Enabling Commerce Using Remote and Electronic (SECURE) Notarization Act is a bipartisan bill that would authorize every notary in the U.S. to perform remote online notarizations. It would also provide nationwide uniformity to streamline interstate transactions.

Is RON the Same as an Electronic Signature?

Remote notarization is distinct from signing a document electronically. Electronic signatures have been permitted since 2000 at the federal level under the Electronic Signatures in Global and National Commerce Act (“E-SIGN”). Additionally, 48 states, the District of Columbia, Guam, Puerto Rico, and the U.S. Virgin Islands have adopted the Uniform Electronic Transactions Act (“UETA”), which was proposed by the Uniform Law Commission in 1999. Illinois and New York have enacted their own electronic signature laws instead of the UETA.

What Do State RON Laws Do?

Some states allow any document to be notarized remotely, while others have special requirements for wills, powers of attorney, and other estate planning documents. There are varying requirements for ensuring the privacy of the signer.

What Does the SECURE Notarization Act Do?

The SECURE Notarization Act of 2020 was introduced on March 18, 2020, to create a federal standard for remote online notarization. Because notarization is generally controlled by the states, the 2020 bill applied only to “electronic records occurring in or affecting interstate commerce.” It would also have required federal courts and the states to recognize remote notarizations “performed by a notary public commissioned under the laws of other states.”

The bill was never voted on, but groups such as the National Association of Realtors, Mortgage Bankers Association, and American Land Title Association have continued to push for uniformity at the national level.

The law would also create minimum standards to protect consumers from fraud, including multifactor authentication, knowledge-based authentication of identities and credentials, and audio-visual recording of the notarial act. It would not interfere with a state’s ability to regulate RON or require more stringent standards.

Learn More About Remote Notarization and the Law

The COVID-19 pandemic has driven greater demand for RON with a majority of states enacting RON legislation or rules. If passed, the SECURE Notarization Act would streamline the process through national standards and ensure the enforceability of remotely notarized documents across state lines.

Concord Law School is the nation’s first fully online law school, and we are accredited by the State Bar of California. If you’re interested in learning more about our online law degrees and single law courses, request more information today.

What Is Stablecoin and How Will the U.S. Regulate It?
Is It a HIPAA Violation to Ask About the COVID-19 Vaccine?

Due to its accreditation by the Committee of Bar Examiners, Concord has the authority to offer a Juris Doctor degree that qualifies recipients to take the California Bar Examination and obtain admission to the practice of law in California.