Overcoming Drone Delivery Regulations in the Time of COVID-19 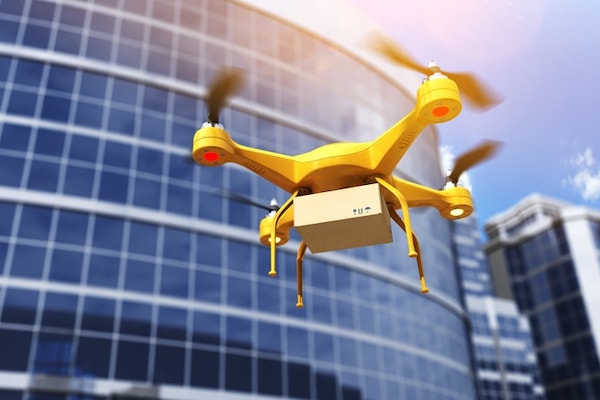 As the COVID-19 pandemic brought stay-at-home orders and widespread store closures, American consumers went online to do their shopping. In the second quarter of 2020, online shopping increased by 44.4% compared to the same period in 2019, according to U.S Census Bureau Data. Ecommerce purchases accounted for 20.8% of all retail sales.

Although the pace of online shopping has begun to slow somewhat as brick-and-mortar stores have reopened, the health crisis has been a boon to online retailers, or e-tailers, such as Amazon. That’s not to say there haven’t been challenges. Amazon had to fine-tune its operations to keep up with demand while implementing measures to protect employees from the coronavirus.

One such action was to step up its efforts to implement delivery by drones. The company first announced plans in December 2013 to use drones to make deliveries within 30 minutes. Amazon CEO Jeff Bezos said the service, “Prime Air,” would be rolled out in as little as 4 years.

That estimate proved to be optimistic—Amazon still has not made a drone delivery in the U.S. However, the company recently cleared one regulatory obstacle by obtaining a Part 135 air carrier certificate from the Federal Aviation Administration (FAA).

What most people call a drone is technically an unmanned aerial vehicle (UAV) that is autonomous or operated by a human. The first drone was developed during World War I by British engineer Archibald Law, and military UAVs have been used in various capacities ever since. The FAA issued its first nonmilitary UAV permits in 2006 and began developing regulations that would enable the safe commercial and recreational use of drones.

Between 2006 and 2014, the FAA issued just two commercial drone permits per year on average, equal to the number of requests. However, Amazon’s Prime Air announcement and drone use by other companies spurred increasing interest in the technology. The FAA issued 1,000 drone permits in 2015 and 3,100 in 2016. Today, more than 1.2 million recreational UAVs and nearly half a million commercial UAVs are registered with the FAA.

The Regulations Get Simpler

Historically, drone use by operators other than modelers was governed by the same rules as commercial aviation, which made it economically unfeasible. However, in September 2014, the FAA began using its authority under Section 333 of Pub. L. 112-95 to issue exemptions to those rules for drone operation. In 2018, that authority was codified under 49 U.S.C. § 44807, although the term “Section 333 exemption” is still used.

On June 21, 2016, the FAA announced the release of 14 C.F.R. Part 107 governing the operation of drones weighing less than 55 pounds on takeoff. Although the rules impose significant limitations, they apply to most recreational and commercial drone operations without the need for Section 333 exemptions.

Under Part 107, UAVs are limited to a groundspeed of 100 miles per hour and an altitude of 400 feet. The drone may be flown in uncontrolled Class G airspace without permission from air traffic control. The remote pilot in command, the person manipulating the aircraft controls, or a visual observer must maintain unaided visual contact with the aircraft throughout its flight. Flight is limited to daylight and twilight hours with a minimum flight visibility of 3 statute miles. The drone may not be flown over people who are not direct participants in the flight.

While operators may “transport property for compensation or hire within state boundaries” under Part 107, the visual contact requirement limits the feasibility of that rule for delivery services. Operators who wish to operate a drone beyond visual line of sight must obtain an air carrier certificate pursuant to 14 C.F.R. Part 135.

Remote pilots operating under Part 107 don’t need a pilot’s license, but they must obtain a certificate with a small UAV rating by meeting eligibility criteria and passing an aeronautical knowledge and safety test. Air carrier certificates, however, are generally issued to operators of manned aircraft used in interstate, foreign, or overseas transportation or to carry mail. UAV pilots must hold a commercial pilot certificate and any applicable ratings or apply for a Section 333 exemption.

Every state also has rules governing the operation of UAVs. Companies seeking to engage in drone-based delivery have a complex regulatory framework to navigate.

The Current State of Drone Delivery

Wing Aviation, a subsidiary of Alphabet (the parent company of Google), received the first air carrier certificate for drone deliveries. The FAA issued a single-pilot operator certificate in April 2019 and a standard certificate for unlimited operations in October 2019. In the U.S., Wing delivers food and over-the-counter medications in Virginia.

The FAA issued the first standard certificate for drone operations with an exemption for operation beyond visual line of sight to UPS Flight Forward on October 1, 2019, according to UPS. The company immediately used its quadcopter drone to deliver medical products and specimens to WakeMed’s hospital campus in Raleigh, North Carolina. Although UPS Flight Forward drone delivery services are currently limited to North Carolina and Florida, the standard certificate gives the company the option to expand its operations.

Those services have not received as much attention as Amazon’s Prime Air. You still can’t order something on Amazon and get it in 30 minutes or less via drone, but the company’s efforts, coupled with evolving FAA regulations, should soon make the concept a reality.

Learn More About the Intersection of Law and Technology

Companies will continue to innovate to overcome the challenges of the health pandemic, and the U.S. legal system will need to respond in kind. Concord Law School offers two online legal degrees*:

We also offer single courses in such areas as business law, health law, intellectual property, and cyber law to help you stay up-to-date on legal issues and trends.

Request more information on any of our online programs today.