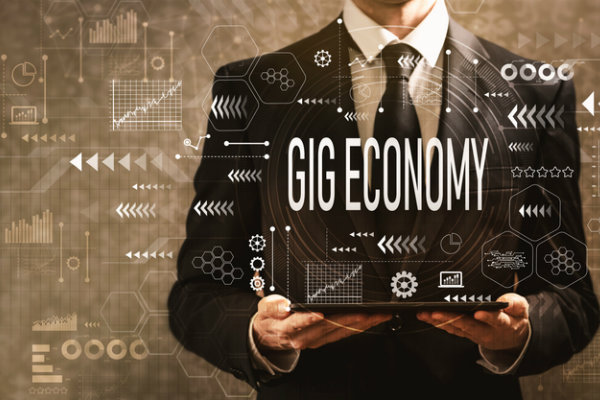 The move was hailed by organized labor proponents but disparaged by companies like Uber, Lyft, and DoorDash, who are required under the new law to provide a minimum wage and certain benefits to workers—unless they can prove their workers qualify as independent contractors under the new, stricter standards.

The law underscores the changing nature of work in the new “gig” economy.

The Rise of the Gig Economy

The idea of hiring temporary workers dates back to the reign of Ramses the Great, who ruled Egypt from 1279 to 1213 B.C. Anticipating war with the Hittites, Ramses augmented his army with thousands of paid professional soldiers—history’s first recorded use of mercenaries.

In modern times, temporary workers run the gamut from highly paid consultants to freelance writers to babysitters and other caregivers. However, companies such as Uber and Lyft have transformed the concept of temporary work by creating technology platforms that match workers with short-term contracts and freelance assignments. This has created a growing gig economy, in which large numbers of workers are unaffiliated with any particular employer.

These platforms provided temporary work for an estimated 3.7 million people in 2016, according to a study by Inuit and Emergent Research. The study projects that number will almost triple to 9.2 million by 2021. Gallup estimates that 29% of U.S. workers rely on the gig economy as their primary source of income. Generally, these workers are classified as independent contractors rather than employees of the companies that use their services.

Who Is an Employee?

Various tests are applied to classify workers as employees or independent contractors, depending upon the state or federal statute involved. The Employee Retirement Income Security Act, federal antidiscrimination statutes, and the Internal Revenue Service use the common law “right to control” test. Developed by the courts to determine when an employee is acting as an agent of the employer for purposes of tort liability, these principles were formalized in a 10-factor test in the Restatement (Second) of Agency § 220.

The Fair Labor Standards Act (FLSA), 29 U.S.C. § 201, et seq, defines “employ” as “to suffer or permit to work.” Because this definition is more expansive than those used in other statutes, the Department of Labor (DOL) applies the “economic realities test” test to determine who is an employee under the FLSA. The economic realities test considers whether:

Changing Guidance on Who Is an Independent Contractor

To address these concerns, the Obama administration issued a guidance document in 2015, interpreting the economic realities test in light of the worker’s economic dependence on the employer. The document suggests that the FLSA definition of employment is broad by design and should be construed liberally to cover as many workers as possible.

The Trump administration quickly removed the document from the DOL website, creating uncertainty as to the status of gig economy workers. In response to an inquiry by an unnamed “virtual marketplace company,” the DOL issued an opinion letter in April asserting that gig economy workers are independent contractors under the economic realities test. The letter suggests that the company is merely a “referral service” for workers who are hired by consumers.

Although the letter is not legally binding and applies only to the company that made the inquiry, some labor advocates consider it a setback for gig economy workers, given that courts often rely on agency interpretations of the law. Other experts argue that Uber and other well-known gig economy companies would not meet the criteria outlined in the letter.

The ABCs of Employment

Connecticut, Illinois, and Nevada, among other states, apply the more stringent “ABC test” in determining a worker’s status. In a unanimous decision in Dynamex Operations West, Inc. v. Superior Court of Los Angeles, No. S222732 (Cal.Apr. 30, 2018), the California Supreme Court adopted the Massachusetts version of the test, which requires a company to prove all of the following criteria for a worker to be classified as an independent contractor:

A. The worker is in no way controlled or directed by the company either under contract or in the performance of the work.

B. The work performed is outside the company’s normal course of business.

C. The worker customarily performs this type of work as part of an established trade, occupation, or business.

Gov. Newsom’s signature on Assembly Bill 5 codifies the Dynamex decision and applies it to the Labor Code and Unemployment Insurance Code as well as wage orders. The bill provides a list of exempted occupations, which does not include gig economy workers. Gig economy technology platform providers have vowed to continue to seek exemption from the law.

The gig economy has a certain appeal for workers, who retain a degree of autonomy over what they do and when and how they do it. Arguably, however, the gig economy primarily benefits the companies that hire temporary workers, who have fewer rights and protections than employees. The law is only beginning to evolve to address this new dynamic.

Concord Law School is the nation’s first online law school. We are part of Purdue University Global, a public, nonprofit school within the renowned Purdue University system. Concord offers two legal degrees—the Juris Doctor, for those who wish to become practicing attorneys licensed in California, and the Executive Juris Doctor, for those seeking to enhance their career by developing legal expertise.* We offer single online courses in employment law and a myriad of other legal topics. Request more information today.

Stem Cell Therapies Ruled a ‘Drug,’ FDA to Regulate
Does the Fourth Amendment Extend to Cell Phone Searches at the Border?