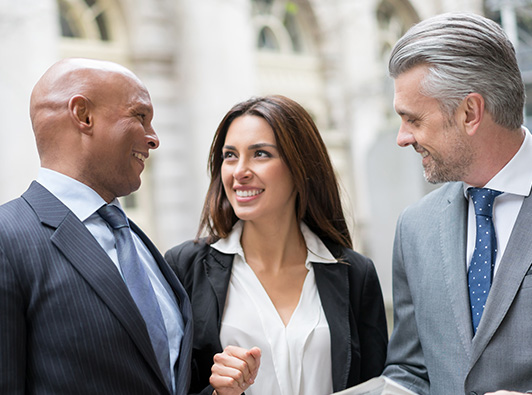 Want to gain a leg up on your job competition? One very valuable and rarely employed way to do that is to bring history to the job-search table. That means delving into the history of your prospective interviewer(s), employer(s), industries, practice areas, and the geographic location(s) where you want to work. Each of these learning experiences won't take long and can give you the edge when it comes to garnering interviews and job offers.

Morgan had just graduated from law school and was seeking her first job. She focused her job-search strategy on law firms where she thought she might be competitive, and then added in a handful of firms she deemed long shots. To her surprise, she was invited to interview at one of the long shot firms. The firm advised her that she would be interviewing with three partners and a senior associate, lunch included.

In preparing for her interview, Morgan researched the interviewers' biographies, but then went a step further: she expanded her searches to find out anything she could about their families. While most of the information she turned up did not appear valuable, she did stumble across one interesting fact: the son of one of the interviewers had not only attended her undergraduate institution (Yale), but also lived in the same residential college (Jonathan Edwards), albeit prior to her college years. She was determined to find a way during the interview to bring up this fact.

She did not have to do that. During her interview, the father of her fellow alumnus said: "I see you went to Yale. My son went to Yale. What college were you in?" When she responded "Jonathan Edwards," she could see right away that her questioner perked up and became much "warmer" for the duration of the interview.

Two weeks later, she was offered a job with the firm. Later, the father of her fellow alum told her that her shared residential college experience with his son was what tilted him in her favor. Going in-depth in the personal history of her interviewer paid off handsomely.

Thad's first job out of law school was with a State Legislative Reference Library in the Pacific Northwest. Having caught the legislative "bug," he set his sights on Capitol Hill in Washington, D.C., and devised a job-search game plan that focused on his goal: working for one of the congressional support offices, his top choices being the Office of Senate Legal Counsel and the House Office of the Legislative Counsel.

Thad set his sights high, mindful that his background did not exactly fit what these agencies customarily sought, but he thought that he might compensate for his self-perceived under-qualifications by learning as much as he could about the origins and functions of these legislative branch agencies.

He found a wealth of information about their histories in their enabling legislation, legislative histories, and reports about them issued by the Government Accountability Office (GAO) and Congressional Research Service (CRS). The GAO website devoted an entire section to reports it had done over the years on "Congressional Support Agencies." Thad was able to unearth a CRS report on Support Offices in the House of Representatives: Roles and Authorities at, of all places, the Federation of American Scientists website.

He then rewrote his resume to emphasize his duties, responsibilities, and achievements in light of what he derived from his research, and crafted transmittal emails that identified his background and knowledge in terms used by these agencies.

Thad was invited to interview with the Senate Legal Counsel's Office, where he had the opportunity to expound further on what he had learned. When the next vacancy popped up, he was invited back for a second interview and won the job.

Riley, fresh out of law school, was invited to interview for a position with a 40-attorney workers' compensation defense firm. The job ad said that the firm was seeking 0-2 years of experience. So, while Riley assumed that an experienced lawyer would likely get the job, he applied anyway and came to my former company "seeking an edge," as he put it.

The "edge" we suggested was to come into the interview well versed in the history of workers' comp law. Our strategic thinking was that not only would he stand apart from other candidates by being able to demonstrate that knowledge during the interview, but that the knowledge itself would give him a confidence boost.

We found several excellent histories of the discipline online, and distilled them down into a manageable "read" for Riley. He learned that it is one of the oldest practice areas, dating back 4,500 years, when the notion of compensating work-related injuries and illnesses first emerged in Sumer and was later included in the Code of Hammurabi, which then spread to both classical civilizations as well as Arabia and China; that it disappeared from legal doctrine during the Dark Ages, but made a partial comeback under early English common law, where the restrictive concepts of "contributory negligence," the "Fellow Servant" rule, and "assumption of risk" evolved in both the UK and U.S. as they experienced the Industrial Revolution; that it received a workers' rights injection in the late 19th century from, of all people, German Chancellor Otto von Bismarck; and that the first comprehensive U.S. workers' comp law was enacted in Wisconsin in 1911, which prompted a cascade of similar laws in virtually every other state, their basic premise being the concept of "no-fault" insurance."

By the time Riley walked into his interview, his self-assurance had risen exponentially from when he first came to us. He found that he knew more about the practice's history and rationale than even some of his panel of interviewers. After he was offered and accepted the position, he was told by the partner to whom he was assigned that his knowledge of the practice area and its development had been the deciding factor in the decision to hire him. The firm had not only been impressed by his understanding of their practice, but even more by the fact that he had made the effort to learn about what they did to such an extent.

"History" in the job-search context is an expansive concept. It means the history of everything that could impact your decisions regarding where and to whom to apply, their origins and evolution, where they are situated, and much more. It also means-and this is critical for the due diligence you need to do before accepting any job offer-the historical lessons from which you can predict what might happen in the future.

The philosopher George Santayana is credited with saying: "Those who don't learn from history are condemned to repeat it." Translated, that means that history often contains some very rough spots that, if we study them, can help guide us to a better future. Those words were never as meaningful as they are today, when a host of external factors increasingly control our lives and livelihoods. The Age of Uncertainty and Volatility is only going to intensify, and in many instances, history will be our only guide.

Oh, and by the way, history in the age of instant, real-time communications means everything that happened up to right now.

Where to Find the Info

Thanks to the Internet and Google, what used to be a challenge is now a piece of cake. Frequently, a simple Google search turns up all the information that you need. Here are a few suggestions to supplement your historical web searches and make them even easier and more complete:

Talking to people who have spent time working at your prospective employer is always a useful enterprise. Martindale-Hubbell's Law Directory not only records where lawyers are currently working, but also from whence they came.

There is a trend in the "BigLaw" community to produce firm histories, sometimes of book length. While slanted, of course, these can be valuable supplements to a history search. Many large firms (e.g., www.kattenlaw.com/firm-history), and even some smaller ones, have added history sections to their websites.

Publicly traded companies must file multiple documents annually with the Securities and Exchange Commission. In addition, they are enticing targets for authors seeking an interesting story. For older companies, these do not necessarily have to be recent works. The "muckraking era," for example, generated a variety of extremely well-written histories of companies such as Standard Oil (see The History of the Standard Oil Company, by Ida Tarbell). The fascination with big corporations continues today.

Every U.S. government department and agency is the product of either legislation (e.g., the Department of Energy Organization Act) or an Executive Order (the Federal Emergency Management Agency). These are, of course, readily available online, along with legislative histories, GAO reports, CRS reports, and countless agency reports to Congress.

Many federal departments and agencies actually have in-house historians and historical offices. In addition, both the U.S. Supreme Court and the Federal Judicial Center have similar offices, as do five legislative branch organizations.

There is also abundant information available on the Internet about state-level entities. One very good source is usually the state legislative reference service/library.

Local governments generally vary considerably in the amount of historical and even contemporary information they make available, depending on the size of the locality.

The websites of the more than 200 international agencies to which U.S. lawyers are eligible to apply for jobs usually contain information about their origins and history. For example, see the World Intellectual Property Organization history section.

In addition to the vast array of excellent books on the history of many different industries (and labor unions), thousands of trade associations can be consulted for the histories of their particular businesses or industries. If they themselves do not go farther than the history of their own association, they are nevertheless great referral services to industry historical literature.

Learning about and understanding a practice area's history can be the most important type of job-related historical research you can do, an examination that will almost always set you apart from your peers competing for a job. For example, if you want to work in workers' compensation, you should know the origins and development of workers' comp law to the present day before you venture into a job interview.

As realtors often emphasize: location, location, location. Where you wind up practicing law can be more important than any other job search component. If you locate your practice in a vibrant, growing, collaborative community with forward-looking goals, your boat is likely to be lifted along with all others. If you go elsewhere, the likelihood is that you will go down with the ship.

If this does not concentrate your thinking about the central importance of location to your professional and personal well-being, nothing will.

One of the very best sources of a lot of local community information is the Census Bureau's American Community Survey (ACS).

Studying the history of a potential place to settle can also help you make an informed decision. Communities that exhibit an upward growth curve are, of course, preferable.

The best sources of historical information can usually be found in local historical societies and libraries. In many localities, they will overwhelm you with information.

Adapting to the Future of Law: Overview
Who Should Earn an Executive Juris Doctor?