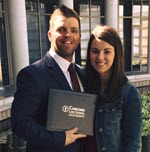 He graduated from Oklahoma Baptist University (also in Shawnee) in 2007 earning his bachelor’s degree in political science.

He worked part time as a bank teller while going to school, which became a full-time job as a personal banker for several years before he decided to make a career change, joining Oklahoma’s Department of Human Services Child Protective Services division as an investigator involving child abuse cases.

“I am in court basically weekly writing reports, application orders for removal, as well as other court documents that are required.”

Since the 8th grade, Zach wanted to be a lawyer. He considered going to a local brick-and-mortar law school nearby at night but decided it was not a viable option. “I was admitted and quickly learned that their evening program was anything but that. There were several classes that started in the afternoons, which, with my work, made it impossible.”

Zach didn’t give up. He did some research, made some phone calls, and asked a lot of questions.

“They made it very clear to me what I was going to be facing into—25 to 30 hours a week for study time at a minimum.”

He decided to enroll at Concord Law School in 2013. The past few years have been busy for Zach. He met and married his sweetheart, and in his last year of school they welcomed their first child, a daughter, into the world.

“Being in law school helped with understanding the many aspects of our cases when they go to court. While at Concord, I was promoted into a supervisory role where I supervise a unit of CPS investigators.”

“Concord more than met my expectations. It allowed me to get an affordable, high-quality legal education taught by highly experienced professionals in the legal community. Several of my friends are going to brick-and-mortar law schools and we talk often. I can tell you that Concord’s faculty is much more responsive.”

Law school wasn’t without its challenges. “I would come home from work in the evenings and spend hours working on assignments—and saying ‘no’ to friends quite often. Going to law school online requires a lot of discipline to balance work, family, and school. It is no walk in the park for sure.”

“My job at CPS was very tedious and did not necessarily end at 5:00 pm all the time. There were times I did not know how I was going to make it through law school, especially on those nights where I was called out by law enforcement at 5:00 pm and worked on a case until midnight. Those evenings did not end until early hours in the morning as I still had school readings or other assignments.”

Zach credits a good support network with helping him earn his degree.

“Fortunately, I had a boss who was very supportive of me furthering my education and a wife who was understanding, supportive, and encouraging through this journey as well.”

In February, 2017, Zach graduated from Concord Law School, earning his JD degree, and sat for the California State Bar Exam.

“My future plans include practicing federal law in Oklahoma City (10th Circuit) where I now live, concentrating on immigration and employment discrimination law.”