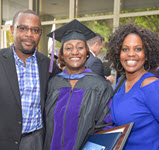 When one thinks of the traditional path most students follow to law school, starting out as a high school physics teacher doesn’t usually spring to mind.

That was the starting point of the journey Michelle Roseway-Peart embarked on, which eventually led to her earning a Juris Doctorate degree from Concord Law School in 2017.

Michelle has been teaching physics since 2000, first at a high school in Jamaica and later at a prep school in Los Angeles, California.

Growing up in Jamaica had a profound impact on her goal of studying the law and becoming a lawyer. “There is a lot of social injustice in Jamaica and I got mad. I also decided to study law so that my children and my students can see that studying hard and accomplishing any task is achievable by great effort.”

Her path had more than a few twists and turns.

“I began studying law in Jamaica in 2008 but had to suspend my studies to transfer to a new teaching assignment in Los Angeles in 2009."

A married mother of two boys (age 9 and 14), Michelle moved again in 2011 to Victoria, Texas, where her husband had a work assignment with Alcoa, Inc.

“Due to my husband’s transfer, I joined the faculty at Victoria East High School in 2011 where I continue to teach physics and chemistry. My students are of mixed ethnic and economic backgrounds with most aspiring to go to college.”

In 2012, Michele decided to resume her legal education. “I initially applied to the law school at the University of Houston and in the process was told how crazy that would be by more than a few people. Driving two hours each way to school while working wasn’t realistic.”

“Balancing going to Concord and teaching was difficult because of the time constraints I had between the rigorous demand of law school and teaching full-time. There were many shortened hours of sleep at night to complete assignments and prepare for classes and examinations while teaching when school was in session. However, during summer breaks, for about six weeks, I would to get better rest at night. I was able to participate in the Learning Education Experience Program at the Texas Rio Grande Legal Aid (TRLA) in Victoria the summer of 2016, which was excellent.

Like many students, Michelle had a strong support system at home.

“My children were young but mature enough to appreciate ‘studying in progress.’ Whenever they knew I was studying they would find a quiet activity. My husband, who was usually consumed with projects at work, would take time to stay home when I had to travel, for example, to California to sit for the first year law school exam. My support system has been great.”

Michelle graduated from Concord Law School in January 2017, earning her JD degree. She sat for the California State Bar exam in February 2017.