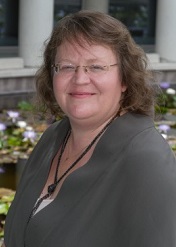 An Education With Multiple Tracks

"The beautiful thing about Concord was that it's an online school."

Kim Cameron had a degree (Beloit College, Bachelor of Arts in Theatre and Econ-Management), but she wanted something more. As an admitted fan of the television series Law & Order, she was curious about a legal career. Upon learning about Concord Law School, she wondered whether the online learning platform would be a unique opportunity for her to act on her curiosity and change her career path and life.

Education Where You Need It

As a theater stage manager, Kim moved around a lot, so it was Concord Law School's structure that enabled her to attend school and earn a law degree. "With all the moving around that I do, I don't know where I'm going to be from one year to the next. So an online situation was perfect for me because I could do it wherever I ended up, or you know, whatever job I was working on. Wherever I was, all I had to do was log on with my computer–that's all I needed. I didn't have to commit to being in a particular location for an extended period of time."

Unlike a traditional law school experience, Concord allowed Kim to multitask. This enabled her to work and keep up with her existing responsibilities while also attending school. "Going to an online law school is perfect because it lets me keep having all these things going on in my life and still, you know, get a degree and do something. But I never thought that I was going to be able to do it because I didn't want to commit to a 3-year brick-and-mortar law school and do nothing else at the same time."

Take Your Knowledge Where You Want

Kim emphasized that Concord equipped her with the education and knowledge needed to launch her career in any direction. "Concord Law School really prepared us to have the tools that we needed to practice law. All of the courses that we had prepared us really well for the bar exam because it was such a broad array of courses, we were prepared to be able to work in several different areas."

Build on What You Know

Upon graduation in 2014, Kim sat for and passed the California State Bar exam and started a law firm with a fellow classmate who was part of her study group. Their common experience made it a smooth conversion. "We were in class together and we studied for the bar exam together. We both passed it together, the February 2014 bar exam, and we got sworn in on August 2, 2014, at the next graduation. And following graduation we signed the paperwork that officially made our law firm a partnership and we started practicing law. We officially invited five other alums of Concord to join the firm as partners. Yeah–it's really an exciting time."