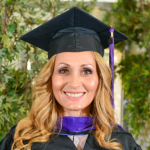 One of the hallmarks of Concord Law School is that it allows busy individuals to study the law regardless of where they live. Iris Miranda certainly fits that bill and then some.

Born and raised in Puerto Rico, Iris eventually moved to Long Island. Today, Iris is a 53-year-old proud mother of eight children and grandmother to ten who somehow found time to earn her bachelor’s degree in business in 2007 and her master’s degree (also in business) in 2011.

Today, Iris works full time as a beneficiary services representative for a health care company contracted with the U.S. Department of Defense, educating active and retired servicemembers stationed in Japan, Guam, South Korea, and Singapore and their families about their health care benefits.

One more thing about Iris: she is the wife of an active duty member of the United States Navy. “We’ve been traveling overseas for the last eight years. The last four have had my husband away from May through December with his shipmates.”

So she has had her hands full. She also had something else—the dream of going to law school.

“I always wanted to be a lawyer but because English is not my first language and it is, how do I put it—not beautiful—I knew that barrier would be huge. So I never thought law school would be possible.”

But Iris didn’t give up. She dug in, doing her research. She came across Concord Law School and realized law school was within reach.

Iris enrolled in Concord in 2012 and began her legal studies while she and her husband were deployed in Spain. She continued with her law studies at Concord when they were subsequently stationed in Japan, which is where she lives and works today. However, law school hasn’t been without its challenges.

“My time zone was completely different so there were many times that my classes were for me at 2 or 3 in the morning and I had to go to work at 6 am. So it was tough and rigorous, but the faculty and staff were wonderful. Every time that I would send an email or if I had a problem, I would get a response in a matter of minutes. That connection and responsiveness made me feel not alone. Concord exceeded my expectations.”

Some might think that going to law school would be out of the question for someone like Iris. They would be wrong.

“Concord offers a very good opportunity for anyone who has circumstances like me—with time zone differences, working full time and raising kids. My lifestyle was probably more complicated than most. Being a military spouse is not easy.”

It certainly isn’t. And neither is law school. But Iris shows that the seemingly impossible is possible.